This post is part of the F# Advent Calendar 2019. Many thanks to Sergey Tihon for organizing these.

Last year I wrote an app for Santa to keep track of his list of presents to buy for the nice children of the world.

Sadly, the development team didn’t do proper research into Santa’s requirements; they couldn’t be bothered with a trek to the North Pole and just sat at home watching “The Santa Clause” and then reckoned they knew it all. Luckily no harm came to Christmas 2018.

Good news is, Santa’s been in touch and the additional requirements for this year are: 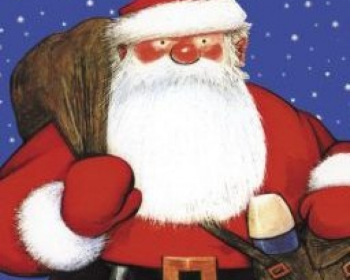 This year I’m going to walk through how you can solve Santa’s problem using something I’ve recently began playing with - FParsec.

I’d describe it as: a library that lets you write a parser by combining functions.

This is only my second go at using it, my first was to solve Mike Hadlow’s “Journeys” coding challenge. So this might not be the most idiomatic way to write a parser.

We’ll assume that Santa has bought some off the shelf OCR software and has scanned in some Christmas lists into a text file.

As you can see the OCR software hasn’t done too well with the whitespace. We need a parser that is able to parse this into some nice F# records and handle the lack of perfect structure.

When writing solutions in F# I like to model the domain first:

First the Behaviour is modelled as a discriminated union: either Naughty or Nice.

A record for the Gift holds the name of a gift and the quantity.

The Child record models the name of the child, their behaviour and a list of gifts they are getting. The overall output of a successfully parsing the text will be a list of Child records.

Modelling this way avoids putting domain logic into your parser - for example, what is the quantity of a single gift? It might seem trivial, but the less the parser knows about your domain the easier it is to create.

Before we get into the actual parsing of the lines, there’s a helper I added called wsAround:

This is a function that creates a parser based on a single character c and allows the character c to be surrounded by whitespace (spaces function). The skipChar function says that I don’t care about parsing the value of c, just that c has to be there. I’ll go into the >>. later on, but it is one of FParsec’s custom operators for combining parsers.

So wsAround ':' lets me parse : with potential whitespace either side of it.

It can be used as part of parsing any of the following:

And as the examples above show, there are a few places where we don’t care about whitespace either side of a separator:

A child line is defined as “a name and behaviour separated by a :”.

And as stated above, there can be any amount (or none) of whitespace around the :.

The pName function defines how to parse a name:

Here it parses any character using anyChar until it reaches the endOfName parser, which is a function that looks for : with whitespace around it.

The result of the parser is then converted into a string using the |>> operator.

The pBehaviour function parses naughty or nice into the discriminated union:

This defines 2 parsers, one for each case, and uses the <|> operator to choose between them. pstringCI "nice" is looking to parse the string nice case-insensitive and then the >>% operator discards the parsed string and just returns Domain.Nice.

These 2 functions are combined to create the pChild function that can parse the full line of text into a Child line.

pName and pBehaviour are combined with the .>>. operator to create a tuple of each parsers result, then the result or that is passed to the Child line constructor by the |>> operator.

Both gifts make use of the startOfGiftName parser function:

A single gift is parsed with:

The allTillEOL function was taken from this StackOverflow answer and parses everything up to the end of a line.

This is combined with startOfGiftName using the >>. operator, which is similar to the .>>. operator, but in this case I only want the result from the right-hand side parser - in this case the allTillEOL, this is then passed into the SingleGift union case constructor.

A quantified gift is parsed with:

This uses endOfQty and pGiftName combined in a similar way to the pName in pChild. Parsing all characters up until the * and only keeping the name part.

pGiftName is combined with pint32 with the .>>. function to get the result of both parsers in a tuple and is fed into the QuantifiedGift union case.

Putting it all together

The top level parser is pLine which parses each line of the text into one of the cases from the Line discriminated union.

This uses the <|> that was used for the Behaviour, but it also requires the attempt function before the first two parsers. This is because these parsers consume some of the input stream as they execute. Without the attempt it would start on a quantified gift, then realise it is actually a single gift and have no way to go into the next choice. Using attempt allows the parser to “rewind” when it has a problem - like a quantified gift missing a *.

If you want to see how this works, you need to decorate your parser functions with the <!> operator that is defined here. This shows the steps the parser takes and allows you to see that it has “gone the wrong way”.

Finally a helper method called parseInput is used to parse the entire file:

This calls the run function passing in a sepBy parser for each pLine separated by a newline. This way each line is processed on it’s own.

That is the end of the parser module.

Mapping to the Domain

The current output of parseInput is a ParserResult<Line list, unit>. Assuming success there is now a list of Line union cases that need to be mapped into a list of Child from the domain.

These have separate structures:

This worked, but because F# lists are implemented as singly linked lists you add to the head of the list instead of the tail. This had the annoying feature that the Child items were revered in the list - not so bad, but then the list of gifts in each child was backwards too. I could have sorted both lists, but it would require recreating the results as the lists are immutable and I wanted to keep to idiomatic F# as much as I could.

A foldBack on the other hand works backwards “up” the list, which meant I could get the results in the order I wanted, but there was a complication. When going forward, the first line was always a child, so I always had a child to add gifts to. Going backwards there is just gifts until you get to a child, so you have to maintain a list of gifts, until you reach a child line, then you can create a child assign the gifts, then clear the list.

This is how I implemented it:

The state is a tuple of lists, the first for the Child list (the result we want) and the second for keeping track of the gifts that are not yet assigned to children.

First this function deconstructs state into the child and gift lists - cList and gList respectively.

Next I’ve declared some helper functions for adding to either the Child or Gift list:

Then the correct function is called based on the type of Line.

The overall result is a tuple of all the Child records correctly populated, and an empty list of Gift records, as the last item will be the first row and that will be a Child.

Finally, the output of parseInput can be piped into mapLinesToDomain to get the Child list we need:

I really like how simple parsers can be once written, but it takes some time to get used to how they work and how you need to separate the parsing and domain logic.

My main pain points were:

I made heavy use of the F# REPL and found it helped massively as I worked my way through writing each parser and then combining them together. For example, I first wrote the Behaviour parser and tested it worked correctly on just “Naughty” and “Nice”. Then I wrote a parser for the Child’s name and : and tested it on “Dave : Nice”, but only getting the name. Then I could write a function to combine the two together and check that the results were correct again. The whole development process was done this way, just add a bit more code, bit more example, test in the REPL and repeat.

The whole code for this is on GitHub - it is only 115 lines long, including code to print the list of Children back out so I could see the results.