This post is part of the F# Advent Calendar 2018. Many thanks to Sergey Tihon for organizing these.

So this year I decided to write something for the F# Advent Calendar, and even though I picked a date far enough in the future, panic still set in. I’m not one for “ideas on demand”, and after a bit of deliberating about Xmas themed games, I finally settled on something that let me explore my favourite parts of F# at the moment:

My initial design was for something a bit more complicated, but I scaled it down into simple Web App where Santa can: 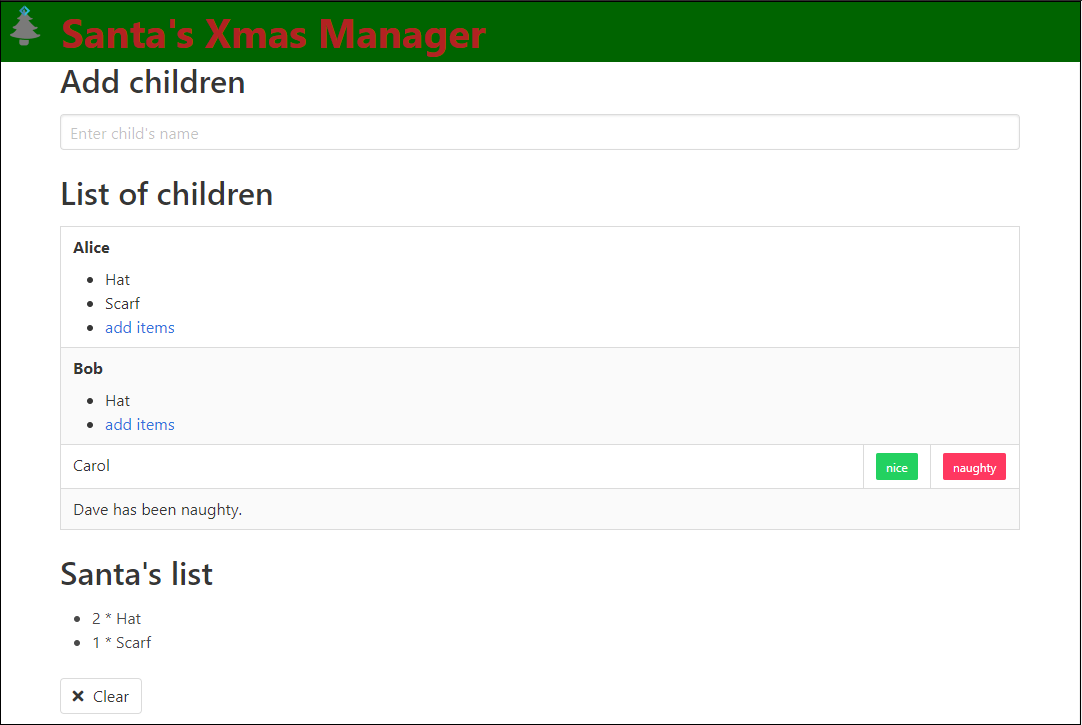 The app is written in F#, using Fable, Elmish and Fulma (which I also used to write Monster Splatter) and all the associated tooling in SAFE stack. I did consider writing a back-end for it, but decided to keep things simple.

A common problem with any Model-View-X architecture is that everything that isn’t POCO (Model) or UI (View) related ends up X, so I look for ways to make sure the Domain logic can be quickly broken out and separated from X.

With Elmish, this was very easy. I began my modelling the Domain and the Operations that can be performed on it:

There’s a few things above, so let’s go through the types:

There’s no need to go into implementation of the Domain, it’s pretty basic, but it is worth pointing out that Adding an item to a Nice child, also adds an item to SantasList, or increments the quantity of an existing item.

The main take away here is that the Domain module contains pure F#, no Fable, no Elmish, just my Domain code. This means if I wanted to run it on my F# Services I could use the exact same file and be guaranteed the exact same results.

Full source can be seen here.

I just said I could be guaranteed the exact same results if I ran this code on my Services… but how?

Fable transpiles my F# into JavaScript and runs it in the browser, how could I know this works the same in .NET Core when run on the server?

The answer is Testing - the only way you can be sure of anything in software.

Using the Fable Compiler’s tests as inspiration and the Fable bindings for Jest, I’ve created a suite of tests that can be run against the generated JavaScript and the compiled .NET code.

As of writing there is a Bug with Fable 2 and the Jest Bindings, but you can work around them.

The trick is to use the FABLE_COMPILER compiler directive to produce different code under Fable and .NET.

For example the testCase function is declared as:

in Fable, but as:

Full source can be seen here.

What this gives me is a test can now be written once and run many times depending how the code is compiled:

What’s really cool, is how you can run these tests.

The JS Tests took 2 different NPM packages to get running:

Both of these operated in “Watch Mode”, so I could write a failing test, Ctrl+S, watch it fail a second later. Then write the code to make it pass, Ctrl+S again, and watch it pass. No building, no run tests, just write and Save.

As the .NET tests are in Expecto, I can have the same workflow for them too with dotnet watch run.

I have all 3 tasks setup in VS Code and can set them running with the “Run Test Task” command. See my tasks.json and packages.json files for how these are configured.

I have a CI/CD Pipeline setup in Azure Dev Ops running these tests on both Windows and Ubuntu build agents. That takes 25 written tests to 100 running tests.

As I decided to avoid building a back-end for this I wanted a way to maintain the state on the client by persisting it into Local Storage in the browser.

Instead of just serializing the current Model into JSON and storing it, I thought I’d try out storing each of the users actions as an Event and then playing them back when the user (re)loads the page.

This isn’t a pure event sourcing implementation, but one that uses events instead of CRUD for persistence. If you want to read a more complete introduction to F# and Event Sourcing, try Roman Provazník’s Advent Post.

Most of the application is operating on the “View / Projection” of the events, instead of the Stream of events.

To model each event I create a simple discriminated union for the Event and also used type aliases for all the strings, just to make it clearer what all these strings are:

These are what are returned from the Domain model representing what has just changed. They are exactly what the user input, no normalising strings for example.

The “Event Store” in this case is a simple ResizeArray<Event> (aka List<T>), and each event is appended onto it.

Every time an event is appended to the Store, the entire store is persisted into Local Storage. Fable has “bindings” for access local storage which mean you only need to call:

When the page is loaded all the Events are loaded back into the “Event Store”, but now we need to some how convert them back into the Model and recreate the state that was there before.

In F# this is actually really easy.

It starts by declaring a function to process each event, which will be used by the fold function.

The processEvent function takes in the current state m and the event to process ev, matches and deconstructs the values from ev and passes them to the correct Domain function, along with the current model (m) and returns the updated model (ignoring the returned event as we don’t need them here).

Next it creates state0 using the createDefaultModel function - you can ignore the editorState, as I mentioned above, it has leaked in a little.

Then it uses a fold to iterate over each event, passing in the initial state (state0) and returning a new state. Each time the fold goes through an event in the list, the updated state from the previous iteration is passed in, this is why you need to start with an empty model, which is then built up on with the events.

There’s a lot more I could have talked about here:

But, I think this post has gone on too long already.

What I really wanted to highlight and show off are the parts of F# I love. Along with that, the power of the SAFE-Stack for building apps that are using the same tech stacks people are currently using, like React for UI and Jest for Testing, but show how Fable enables developers to do so much more:

I also wanted to share my solutions to some of the problems I’ve had, like running the tests, or setting up webpack, or using FAKE.

It doesn’t do everything that the SAFE Demo applications do, but I hope someone can find it a useful starting point for doing more than just TODO lists. Please go checkout the source, clone it and have a play.

If anyone has any questions or comments, you can find me on Twitter, or open an Issue in the Repo.

Don’t forget to have a play ;)