I discover this fact the weekend just gone whilst performing an upgrade to TFS 2015.3 from TFS 2012.4.

The plan was to only upgrade the TFS Server and leave the build infrastructure running on TFS 2012. This seemed like a sound idea as I know Microsoft care about compatibility, and the upgrade was more complicated than your usual one. I figured it would just keep working and that I’d upgrade the build agents later, boy was I wrong.

I may have even checked the documentation, which does not show a compatibility, but it isn’t explicitly called out, so I could have glanced over it. 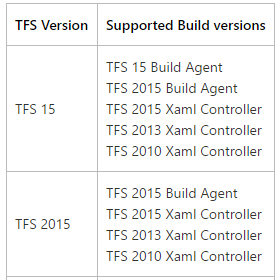 The problems with TFS 2012 build agents against TFS 2015 manifested as two different errors when I queued a build without a Drop Location. Queuing a build with a drop location worked just fine.

The build infrastructure runs on a different domain to the Team Foundation Server.

The error manifested as:

The error that appeared twice was not very helpful.

I eventually debugged this (details later) and found out that the last task on the build agent was trying to access tfs-server with no DNS suffix of .corp.com to publish some logs. As a temporary workaround I bobbed an entry in the hosts file entry to make tfs-server point to the actual IP of the TFS server.

With the all the steps of the build resolving the server name, I came across the second error.

The error message was still no more use than the last one:

My debugging would lead me to see that this was caused by TFS returning an HTTP 400 (Bad Request) for the exact same step as the first error.

It was at this point I figured something was really wrong and started searching for compatibility problems. In my effort to find a KB or update I re-checked the documentation and noticed the lack of support as well as finding an MSDN forum post from RicRak where they solved the problem by upgrading their agents off of TFS 2012.

My solution was to upgrade our entire build infrastructure (some 9/10 servers) to TFS 2015, and discovering you must install VS2015 on the servers too to get the Test Runner to work.

One day of diagnosis and testing to get to the point of knowing TFS 2015 build agents would solve the problem and still build our codebase. Another half-day was spend upgrading all the servers.

How do you figure out when something like this goes wrong? TFS diagnostic logging did not provide any more information than minimum logging did. The error only appeared at the very end of a build, it wasn’t related to a step in the XAML workflow, nor any variables in the build process.

The solution (as always) came from Charlie Kilian on Stack Overflow.

I stopped the Build Service and opened up TFSBuildServiceHost.exe.config and added the following section:

Then restarted the build service and ran the smallest build I could to produce minimal logs.

The network.log file had a few errors, but nothing fatal looking, so I looked in the other files for errors and finally found this line:

That was proceeded by:

Here you can see the server name without the necessary DNS suffix during some HTTP POST to _apis/resources/containers.

This was the point I added the hosts file entry and then got the next error.

For the second error I repeated the diagnostic logging steps and this time found the following errors (searching for Bad Request):

By tracing the ID (in this case 16628) back up the file I found it was a call to the same endpoint, but this time a PUT:

This was the point I gave up thinking this could be fixed by a configuration change.

I wish I had read something like this before I planned the weekend. I did do testing, but because testing TFS in live is risky I had most of the test instance network isolated and that required a lot of configurations; I just thought this error was just configuration based, lesson well and truly learned.

It would have been nice to see this called out more explicitly on MSDN. In my opinion these are two bugs that Microsoft decided not to fix in the TFS 2012 product life-cycle.

On the plus side, I learned some really neat debugging skills I didn’t know before.

Remember, if you’re upgrading from TFS 2012, plan to upgrade your build agents at the same time!