Spin up a new website for each PR so you can see what the finished site will look like.

I really like this idea, so I thought I’d change the Fable Xmas List to deploy a new version on each PR I submitted.

Note: I’ve only done this for my repository, not Forks.

The Xmas List code is built and deployed by Azure Pipelines from my Public Azure DevOps to a static website in an AWS S3 Bucket.

The previous process was to only trigger a Build on pushes to master and if everything succeeded then a release was triggered automatically to push the latest code into the Bucket.

The live site lives on:

The plan is to deploy each Pull Request to another bucket with a naming convention of:

I could have use subfolder in another bucket, but I thought I’d keep it simple here.

The Pipeline for pushes to master will remain unchanged.

To get this to work, you will need to change the Build and Release pipelines.

The first thing you will need to do is get the name of the Pull Request branch in the Release. At the moment this is only available in the Build via the SYSTEM_PULLREQUEST_SOURCEBRANCH variable.

To pass the value of a variable from the Build to the Release you will have to add it into the Pipeline Artifact. As I only had a single value to pass, I just used a text file with the value of the variable in it.

I added a PowerShell Task and used an inline script: 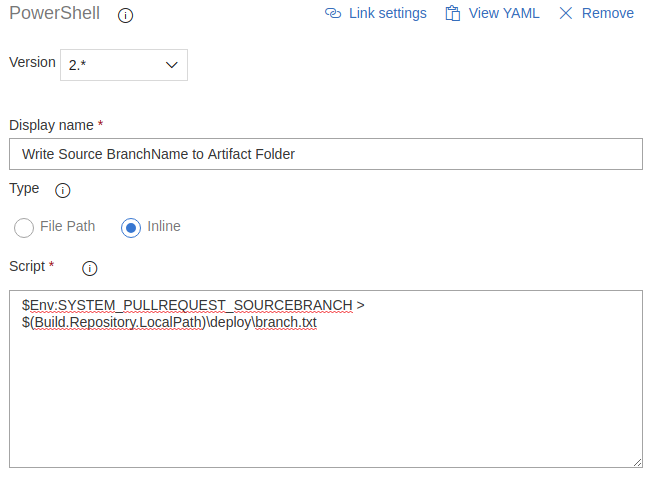 To stop a file been added to the live site deployments, I set the Custom Conditions on the task to:

It only writes the file if the source branch is not equal (ne) to master.

The Build will now publish the Pipeline artifact for Pull Requests with the name of the PR branch in a file called branch.txt.

This is a little bit of a pain, but it is the only way I can find.

Note: There is a variable in the Release Pipeline called Release.Artifacts.{alias}.SourceBranchName but in a Pull Request this is set to merge. That is because we build the PR branch of refs/pull/5/merge. There isn’t a Pull Request source branch name in Releases at this moment. 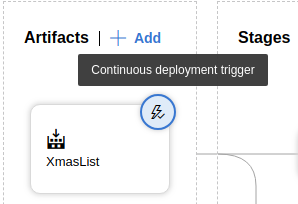 and then Enable the Pull Request Trigger and set the source branch:

To keep things simple I created a duplicate Stage of the live stage and called it PR Deployment(s) and changed it’s pre-deployment conditions to run on Pull requests:

With the duplicate stage setup, I needed to add some extra logic to change the bucket path on AWS.

Again, as I was keeping things simple, I just duplicated and changed the stage. I could have created Task Group and made the Tasks conditional, but this way is easier to know what each stage does.

To get the Branch name available to the Agent I needed to get the contents of the branch.txt file from the Pipeline Artifact that was created by the build.

I added a PowerShell task with an Inline script with the following:

The line Write-Host "##vso[task.setvariable variable=PRBranch;]$PRBranch" will set a variable called $(PRBranch) in the Build agent, so that I can access it in the AWS tasks later.

The final piece is to use this in the S3 tasks:

The last thing I added was to write out the URL of the website at the end of the Process so I can just grab it from the logs and try without having to remember the address.

This is a really nice way to test out any changes on a version of your site before merging a pull request, even it is only for your own PR’s. This will be much more powerful if a team is working on the repository.

There will be many different ways to achieve this, especially if you are using Infrastructure as Code (e.g. ARM Templates on Azure), but this works even on simple static sites.